Funeral Ceremony Rambu Solo’ Toraja - The striking sight of men and women in black, walking in pairs to the beat of kettle gongs to designated seating areas in recently constructed bamboo shelters (lantang or alang) signifies that a Rambu Solo’ is underway. According to the ancient customs of Alukta, Torajan ceremonies divide into two halves: smoke-rising and smoke-descending. As Rambu Solo’ is a celebration of death, it is considered one of the latter. The events for a three-night ceremony that may be held by a high-class family are detailed below.

On the first day, the deceased’s family members will conduct an Aluk Pia ceremony, gathering around a field or open area (rante) where bamboo shelters (lantang) have been built especially for the occasion. Then buffaloes are sacrificed, and the meat is distributed amongst the attendees. After cooking and eating together, more buffaloes may be sacrificed and songs are sung to praise the deceased (Ma’londe) or to express grief (Ma’badong). 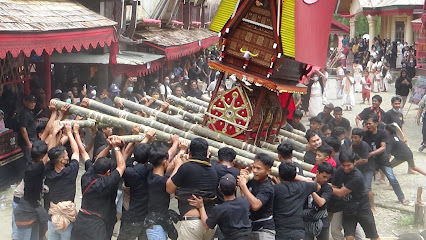 This latter song is performed by a small to large circle of men who sing for the deceased with linked hands, swinging arms and sideto-side movements. On the second day, the main ceremony occurs (Dialuk Tangan or Dipadakkuan Api), and family members and neighbours begin to arrive with sacrificial pigs in hand, sometimes even buffaloes. The number and size of the pigs brought by each guest is listed down as these animals are not only gifts, but they represent debts that the family of the deceased may owe to the guests if they hold Rambu Solo’ of their own. The pigs are then sacrificed and cooked on the spot, after which their meat is distributed once again among the guests. That night, more songs of lamentation fill the air of the ceremonial grounds.

On the third or the last day, the family members prepare the deceased and carry him or her to the grave (Ma’te Liang). More buffaloes are sacrificed and the meat distributed. It is interesting to note that here again social class plays a role as the guests’ status determines the amount of meat they receive. A Rambu Solo’ ceremony is held in the afternoon and on the west side of a Tongkonan, due to this direction’s association with death within the philosophies of Aluk Todolo.

Three days after being placed inside a burial chamber, in some of the southern regions of Toraja, the deceased’s immediate family holds another ritual called Masolan Bombo that lasts from midnight until dawn. During this ritual, the family members may not speak and only the sound of a flute (suling) breaks the stillness of the night (called Pasuling Bombo). This ritual is held to accompany the deceased’s soul (Bombo) on its journey to Puya. A visit to Toraja is arguably incomplete if you haven’t attended and observed this unique funeral ceremony. Wearing black clothes is required, particularly a shirt covering the shoulders and a lower body garment covering up to the knees. Additionally, a man can put on a sarong and a woman can put on a stole or shawl. Donations are recommended, as they are a sign of respect to the bereaved family. Make sure to ask for permission before taking photographs or recording videos.[bt]